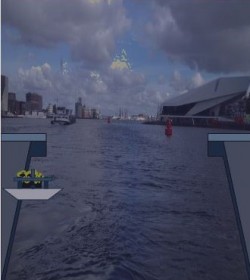 Ria Stroes is a creative coder who participated in the De Pont Hackathon, a collaboration between Lava Lab, Creative Coding Amsterdam, SubmarineChannel & Amsterdam Creative Industries Network. The result: the game Attack de Pont. “I participated in one of the workshops, which was about A-Frame - a VR library for the web. On the library homepage of A-Frame, I found an example of a sphere, a triangle and a cubical, which you could move in an empty VR space. I had already created a small P5 animation about a Ferry, that transported little creatures to the other side and back." "Then I got an idea, what if ... I can create a mix of these two worlds; a 2D-animation and this VR example, both libraries where written in javascript. So I took the example with the sphere, that I could move up en down and put it behind my P5 sketch of the ferry. Now the sphere became a sun and when the sun hits the boot all the hairs of the creatures are exploding and the creatures jump out the boot, but the Ferry doesn't care and goes on... back and forth ... back and forth..." "To my own big surprise it worked out well and on an Iphone or Ipad you can play this little game as you control the sun in VR-space and you can try to hit the boot with the sun.” The second version I created at home is a real VR game. You can play it with cardboard VR glasses.